Inspired by the New Romantics’ reclamation of bygone aesthetics, we have revived our Romantic Sensibility designs in bold new colours for the 21st century. This deep black planner celebrates the drama that made the New Romantic movement some of the most ironic good times popular culture has ever had. 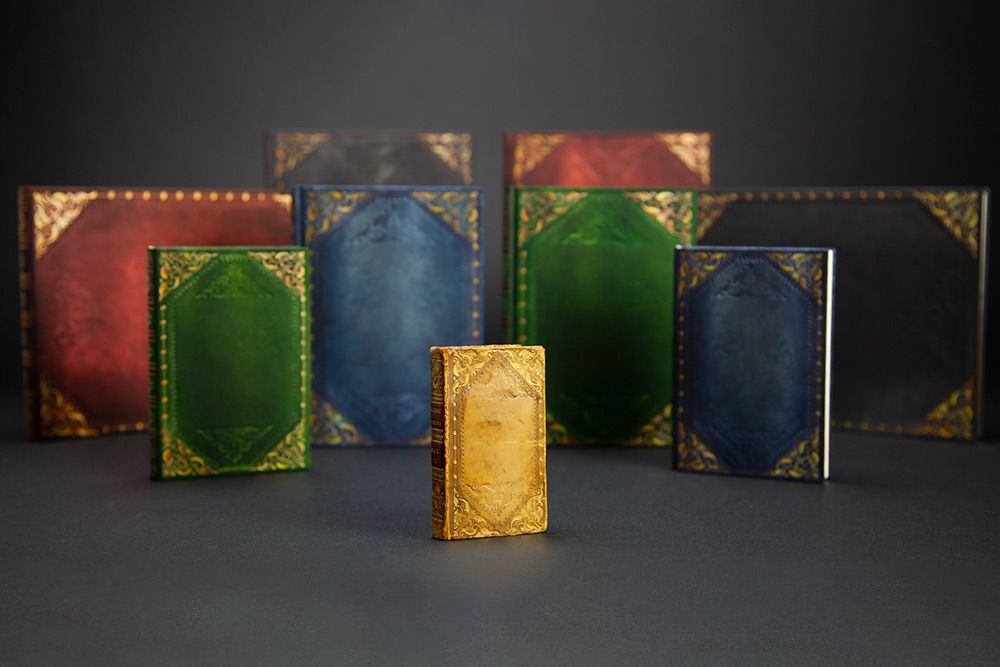 Every genre of modern music that has succeeded in putting a stamp on its time has also made its mark with a distinct visual style. In the United Kingdom during the late 1970s and early 1980s, the impression-making group on the scene was the New Romantics. Members of the movement celebrated unbridled creativity and excessive individuality, contrasting the monotonous, dull look of their urban surroundings. Fashionable club nights became a testing ground where people went to flaunt their provocative new ideas.

The New Romantics were in large part inspired by classic English Romanticism, evolving some of the era’s more indulgent hallmarks to suit the modern music hall and nightclub scenes. Looking to our own history, we decided to do likewise and revamp our own Romantic Sensibility design, which was originally inspired by an 1843 leather binding featuring poetry by the Romantic poet Henry Kirke White. For our Midnight Rebel Bold design, we have replaced the tender colours of that earlier series with a statement-making black. This edgy design is further stripped down by showing off monochromatic embellishments in place of the traditional gold.

The New Romantic movement, whose influence could be seen throughout fashion, design and music, traces its origins to the 1970s nightclub scene of London and Birmingham in the United Kingdom. The popular punk rock of the time had an “against-everything” attitude, but after years of economic recession and a pervasive sense of defeat and hopelessness, that desire for confrontation was replaced with a need to instead escape the drab reality. Organisers of Roxy Music, Duran Duran and David Bowie club nights tapped into this yearning and the New Romantics scene grew from there.

Dressing up in striking outfits and using makeup to muddle gender distinctions, nightclub revelers embraced the flamboyant, the glamorous and the outrageous. Futurism, fetish and fantasy were combined with frilly period fashions of English Romantics, Puritans and French “Incroyables.” These ostentatious displays of sartorial glamour drew the attention of the media, who rushed to come up with names for the image-conscious crowd. “New Romantics” was the moniker that ultimately took hold. And so, it made sense as our series title, as it connected to both our reimagining of our “old” Romantic Sensibilities series and the bold new direction the actual New Romantic movement took.

With their theatrics, the New Romantics defied enough norms to be recognised as the rebels of their day. They waged their artistic revolt at exclusive club nights and subsequently on televisions turned to MTV. Our Midnight Rebel Bold cover celebrates this spirit of rebelliousness and faith in good times.